Windows XP: The End is Nigh - are you prepared? 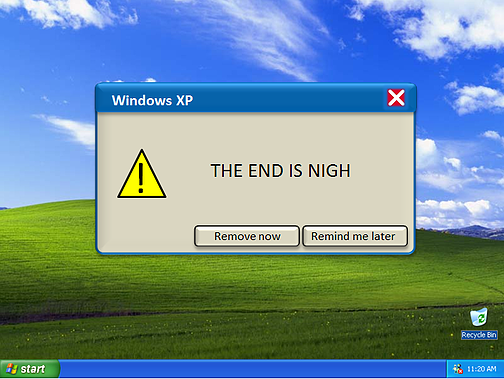 So Windows XP will no longer be receiving support from Microsoft from April 8th. But surely, you might say, hardly anyone is using XP anymore? According to the recent SBP/Amarach survey, as many as 19% of businesses in Ireland are still using XP! This makes it the 2nd most popular operating system in Ireland (Windows 7 is on 62% and Windows 8 is a low 7% of the market). Some people might say “so what”. Well, let’s briefly look at the implications this has after April 8th:

So, if you’re a business, it makes absolutely no sense to remain on XP. That deadline is fast approaching. If you currently have devices running XP, it is recommended that you get a Microsoft Certified Partner to help you migrate your devices to Win 7 or 8. The good news is that newer operating systems tend to have lower malware infection rates, and certainly the security and encryption enhancements in Win 8 have clear security benefits to businesses. Upgrading also leads to improved performance, user interface and also additional functionality.

If you are a Microsoft Partner, you really need to contact all of your customers within the next 3 weeks to educate them regarding the change, and to urgently alert them to the need to migrate off XP. Even if you know your customers’ network and devices quite well, you need to ascertain that they don’t have an old XP laptop that someone is using, and which they haven’t told you about. They may have forgotten about occasionally used devices running on XP. It’s imperative that these get migrated too. So call them, email them, bring it up in meetings with them – you are doing them a good service when doing so.

And after April 8th, do it again - reach out to those customers again about migrating from XP. There’s a danger that, like Y2K, users may say “what was that all about, everything is working fine” and leave XP on the devices. As time goes on, the risk factor of those machines, and therefore the risk of data theft and other cyber-crime, will increase exponentially.

You might think that most serious businesses have migrated from XP already – especially the large companies. For example, you wouldn’t get a bank running key devices and applications on XP, right? Well, consider this: Most of the ATM’s in Ireland are running on XP. And it’s now too late for banks to migrate to a different operating system before the April 8th deadline…… Yes, you read that right. If you find it worrying, Bank of Ireland recently stated that they are taking “appropriate controls to mitigate this risk” and that it does “not anticipate any issues post April 8”.  So, that’s very reassuring (uh…..). Even more reassuring is the news that AIB is apparently still investigating its upgrade options, despite just a few weeks to go to the deadline.

So, if banks are being slow to make the change, you can bet that other key companies are too – so it’s important to reach out to prospects and customers ahead of, and after, the deadline regarding making that crucial migration.